Today is a beautiful day.  I think I’ll stay inside. 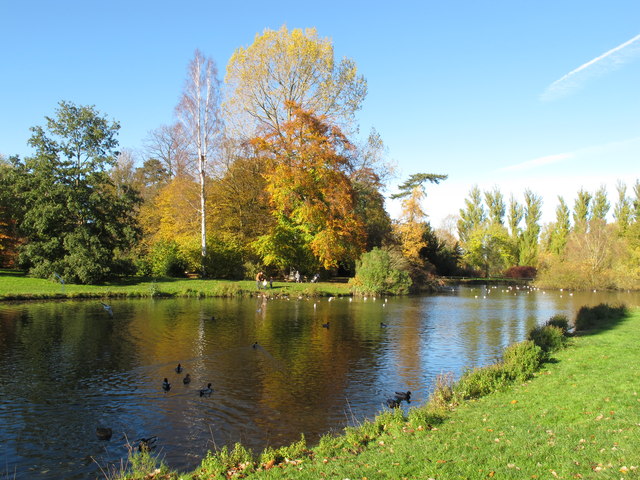 Today is a beautiful day.  The sun is shining.  My computer chair is very comfortable.

Today is a beautiful day.  The pond has come alive with frogs and turtles and ducks.  I think I’ll cook something.

Today is a beautiful day.  The pond water is warm and the children splash around playfully.  The mosquitoes have arrived!

Today is a beautiful day.  Mother Nature has a sense of humor.  The pharmacist has drugs.  My lemonade is tasty.

Today was a beautiful day.  My computer protected me from mosquitoes.   (The technology has no bugs.)

Tomorrow will be a beautiful day.  It will be cool.  It will be cloudy.  The noisy children will be at home with their mosquito bites.  I will have the pond to myself.

I, a human blogger, am writing about zebras today.  Stuff like this always turns out well for everyone involved.

You see, it was reportedly someone of my species who discovered these wonderful animals.  God’s idea was supposedly to improve horses’ figures at the cost of their skins.  Because humans enjoy fancy rugs.

And then, as can be readily observed, folks of my species started spending their time trying to convince lions to stop eating these animals.  But lions are more stubborn than senators and they can be difficult for humans to communicate with.  But our attempts show how we’re environmentally enlightened.

Seriously.  That’s a factual definition.  For instance, zebras conveniently avoid lions and tigers because it’s not appropriate for such “weak” and “slow” animals.  And when they do go for interspecies friendships, they’re still considered “slow” and “soon to be dead,” but in a different way.  And no action can break the cycle of convenience because anything will be twisted around to fit.

It’s a convenient cultural construction, not biological reality, that zebras are slower than lions.  If we redefine speed to something more inconvenient, zebras and lions can live together in harmony.

And with that in mind, the conservation of zebras insults my intelligence.  There’s simply no way to think about a zebra that will not result in the animal getting killed.  That’s not fair to the zebras.

Even though they’re probably pretty tasty…

I had a dream.  I was walking around in Innsbruck, Austria and I discovered a crystal blue river.  I followed that river because it provided a most excellent view of the town on the other side: 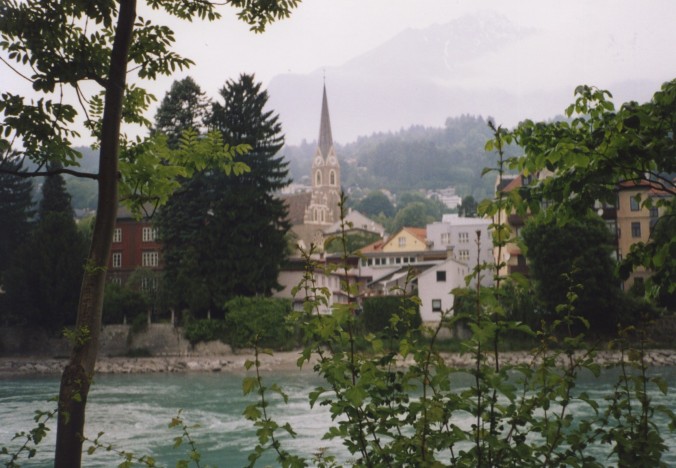 It’s almost such a beautiful scene.

However, as you can see from this picture, there was a problem.  Nature was interfering by getting between me and nature.

That’s not a misprint.  Nature got in the way of nature in my dream.  I suppose that means those leaves must have a compelling psychological significance.

If you read this blog regularly, you already know that I’m not into deeper contemplations that might bring about inspiration or anything like that.  So the interpretation of my dream is very simple… and I’m sure you’ll let me know what it is once you figure it out.

Once upon a time a vicious bison was terrorizing Ted’s cabin. 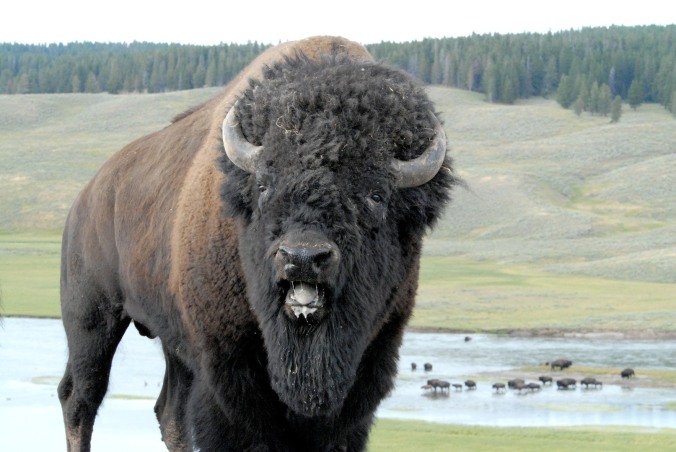 Bison are protective of their land because they’ve learned from history. (Photo credit: Adrian Measures)

Ted had built the cabin far from civilization but he had forgotten to bring a gun, trap, or anything else to protect himself with.  He feared that the bison would maul him and he needed to take action.

Unfortunately for Ted, he hadn’t been to the city in a while.  That meant he only had two liters of Diet Coke, five pounds of ground beef, a few packs of Mentos, a frying pan, and a metal bowl.  He lacked the strength to hurl furniture at the beast.

And he had to rescue himself.

So he fried a meatloaf and stuck the Mentos inside.  Then he poured the Diet Coke into the bowl and left a nice snack outside for the bison.

The bison ate it.

Do you know what happens when Mentos mix with Diet Coke?  They explode.

And so the bison exploded in a flash of orange and red.  Blood and intestines gushed through the window and drenched poor Ted.

Incidentally, the bison had anthrax and Ted became infected.  He died soon afterwards.

Nobody lived happily ever after.

That, my friends, is the meaning of life.  Your green slowly disappears, your environment becomes ever browner, and you get fatter by the moment.

It’s fun while it lasts, but then you get eaten by a lion.

I wish you all a beautiful day.

I went out grocery shopping today and rediscovered this lovely architectural specimen: 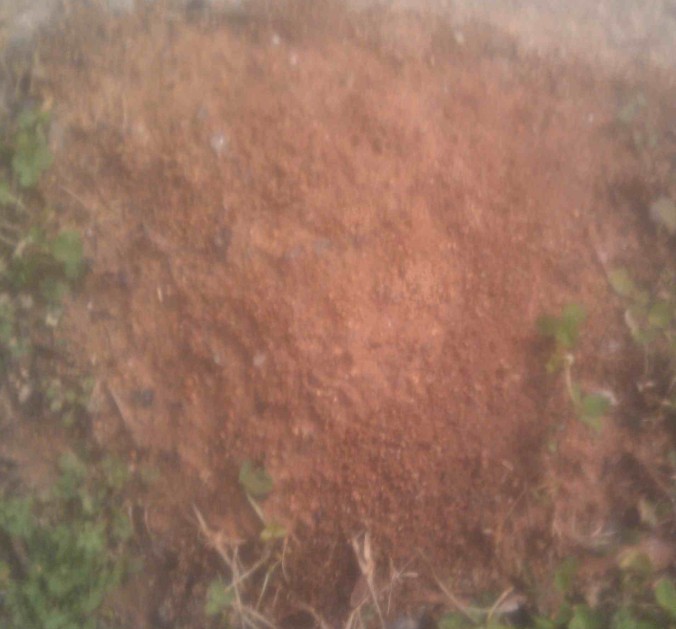 If you look at the clovers, you can see how big this thing is.

Let’s review.  We’ve had rainstorms that should have washed this thing away.  We had the polar vortex that froze the ground and everything on it to a solid block of ice.  One would hope that the grocery store’s landlord was having the lawn mowed, which would have shaved the top off this thing and sent the ants flying off to Oz.  (Or to Dr. Oz at least.  It probably hurts to get sucked up into a lawn mower.)

And yet the anthill remains as large as ever.

Whatever’s in an ant’s armor that keeps it from dying, we need to develop it synthetically and make winter clothing out of it.  Cockroaches may survive a nuclear apocalypse better than humans but the ants will beat us out if there’s another ice age.  This, of course, is why global warming is so critical to our survival as a species.  Keep burning those fossil fuels, people.

The first time I went to Switzerland, I wanted to hike high up in the mountains.  I was staying in Interlaken, an easy jumping off point for the Jungfrau-Aletsch area, and I had a map of its trails.  I soon discovered that I could join the skiers on a bus and then catch a ski lift into the clouds; then, I could presumably have a nice leisurely walk downhill.

Being from a warm-weather place, I failed to recognize a few important details:

1- Tourists are given the same map during summer and winter and this was the end of winter season.  Especially in the higher altitudes, the paths you can hike in summer aren’t clear of snow.  While in the mountains, I saw a few cross-country skiers but no other hikers.

2- Even if there’s a path, one does not simply hike down a mountain.  One hikes down and then the road winds upwards for a time before you can descend again.

3- When “hiking” down an incline on a snowy path, you run and hope to stay upright until you reach a place where you can slide to a stop.  Comfortably or not.

4- When hiking up an incline on a mountain path, you notice the altitude.  The air’s a lot thinner up there and you get winded faster.

5- “Hmmm… I see snow falling from the mountain peaks.  Avalanche?  If I’m buried, they’ll never find me.” Since then, I’ve learned that you’re supposed to carry search and rescue insurance if you go up there.  If you’re traveling alone, I suppose you should also inform someone of your whereabouts.  Since I’m not dead, you can probably tell that no snow crashed down on me.

6- Since it was the end of winter, the temperatures did not stay below freezing for long.  That means the snow softened as the day progressed.  Eventually, my legs would sink into the snow up to my knees whenever I took a step and I was crawling by the time I reached a train station.   So this is why snow shoes were invented…

I did make it through after having descended at least a half kilometer in altitude.   Although the experience was far from ideal, seeing my photos from that day always makes me nostalgic.  Unlike the slog of applying for job after job like I do now, the views were amazing and the scenery constantly changed.  It was also relaxing in an odd sort of way.