Ah yes, the Olympics have arrived and the Russians have been celebrating… except gays and lesbians and guest workers and thirsty people and anyone who wishes to use a restroom with exactly one toilet in it.

That list goes on longer, I know, but I’m not here to rehash commentary that has appeared in a million places during the past few days.  Instead, I’d like to talk about our friend, Vladimir Putin. 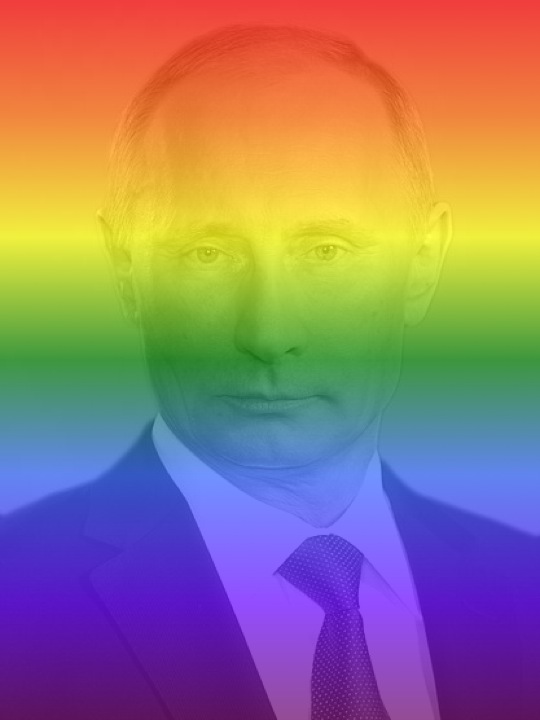 The original is Putin’s official photo, courtesy of http://www.kremlin.ru . They grant permission to modify the image, but I doubt that they had this in mind. If I suddenly disappear tomorrow, that “exciting” vacation in Siberia was not undertaken by choice.

As you can probably tell, I intend to discuss the outrage people are expressing over his statements and policies on homosexuals and homosexuality.  Many are claiming that the whole issue has given Putin a black eye and destroyed his ambitions for showcasing Russia’s greatness during the Games.

Granted, Putin deserves a black eye, but I wonder if he doesn’t come out ahead in all of this.

It’s easy to forget that the LGBT issue is only controversial in certain countries.  He’s in line with the economically and politically critical Arab countries (and Iran) as well as numerous African countries and India, among others.  He was already on the outs with many Western European countries and the U.S.

To me, the whole controversy benefits Putin; he’s driving  a cultural wedge between us and more restrictive nations that will place him on the side of the countries whose friendship he wishes to maintain in the midst of his exploits in the Caucasus (and other places).  There’s more to geopolitics than the U.S. and Europe…

Of course, that makes him relatively immune to contrary arguments.  His LGBT policy, in such a scenario, amounts to little more than the political calculations of a shrewd tactician.

And the protesters are dancing and singing Kumbaya (and some are competing) and asserting that they’re changing the world because their message is getting out.  And in doing so, they forget one of the central Olympic tenets, namely that the Games represent a meeting of all nations and cultures.  That includes the many countries that impose a death penalty on homosexual activity.

Nevertheless, the protesters have managed to raise awareness of the issue among Americans who were already aware of the issue.  For that, the world owes them a profound debt of gratitude.

And silly me!  It seems that I forgot to tell you who the band is.  (The title of this post is “Broken Promises Insult My Intelligence,” not “Lying Insults My Intelligence.”  Very important distinction… )  They’re a Tuvan group called Yat-Kha.  In case you’ve never heard of it, Tuva is located in southern Siberia near the Mongolian border.  The language is Turkic in origin and the culture more closely resembles Mongolian than Russian.

And the vocals, a longstanding art form, are known in English as throat-singing.  Here’s an unofficial video of a song and I’m sure you’ll agree that they don’t growl their lyrics:

Reality check: someone who was “desperate” to join the Western mainstream would not sing so much of an English-language song in Tuvan.  (This was one of the songs the review cited as desperate-sounding.)

And in the interest of full disclosure, here are links to the reviews I mentioned in my last post:

And the picture in my original post was of an instrument that Yat-Kha sometimes uses in their songs.  It’s called an igil.

Lastly, I promise not to be so obnoxious in the future until it suits my purposes again.  The Weekly Writing Challenge wanted me to leave you hanging over a cliff this time around.  I hope the view was nice and that you have not become flattened like Wile E. Coyote.

I don’t have enough time right now to do a full post, but I need to vent.

Earlier today, I discovered an old review for a band whose music I received for Christmas.  The band is not Western and they incorporate aspects of their local music traditions into their work, including so-called “wild” rhythms.  (“Wild” is according to the reviewer.  I’d sooner say “unfamiliar.”  )  The results will astound you.

The reviewer needs to learn a few things.  He claimed that the band sounded good when recasting traditional songs but not so much when they moved towards original Western-style works.  He even goes so far as to say they seem “desperate” to become a part of Western mainstream music.

We all know everyone’s goal is to be like us, right?

But then again, he describes the traditional singing methods as “strange” (in a different review) and “growling,” so I suppose he must have started out with a few prejudices already implanted.

Trust me, that singing ain’t growling…

And unfortunately, I’ll have to stop here.  (Sorry to leave you hanging.)  Once I’ve got my ducks in a row, I’ll post links to the articles and a youtube video if I can find one.  In the meantime, please accept my sincerest apologies and a really cool picture I found.