My long time followers may remember that I enjoy unusual culinary treats.  Today I’d like to share the inedible remnants of a favorite exploration: 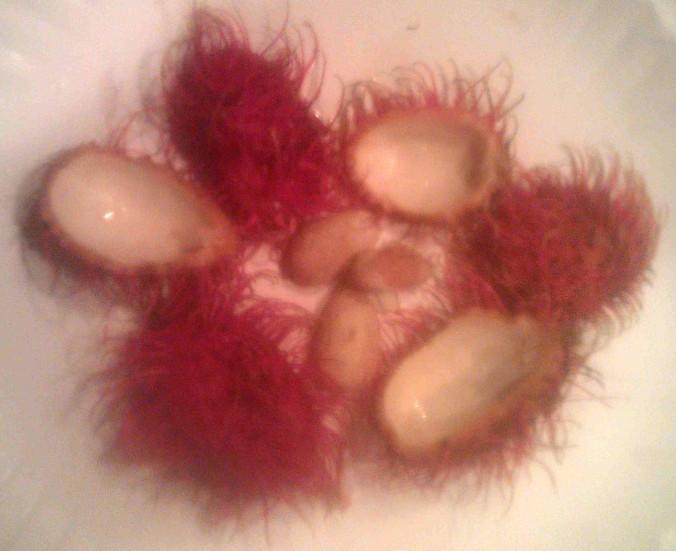 Fruit doesn’t scream as loudly as meat when you cut it open.

This is Rambutan.  You can see the sizable interior and exterior of the husks as well as the almond-sized pits.  I hope that this will serve as an important reminder of several things:

1- If you bite into an unfamiliar fruit without removing the not-so-tasty bits, you probably won’t have an pleasant experience.  I bet this stuff makes a mouth full of lemon peel look pleasant.

2- If you would like to keep your teeth, don’t bite willy-nilly into a fruit.  Those pits ain’t soft.

3- If someone tells you that they’ve designed a bra or jockstrap based on some unknown tropical fruit, it will probably turn out worse than the ever popular banana hammock.  Just say no.

4- Tropical fruit may look expensive, but it’s worse than you think.  There’s a reason the grocery store doesn’t clue you in to all of these inedible components.  The fruit part of a rambutan probably takes up only half to a third of the weight you’re paying for.

Except for videos and where credit to others is given, I own the rights to all content in this blog. You may make noncommercial use of excerpts and photographs if you give proper attribution and link back to the original post. The reproduction of full articles is prohibited.
Loading Comments...
Comment
×
%d bloggers like this: