Mother Nature has bewitched us this year.  Her winter storms have been transforming birds into feathery icicles and freeing the sky from bees.  However, her frosty prestidigitations will be enabling the birds and bees on Valentine’s Day. 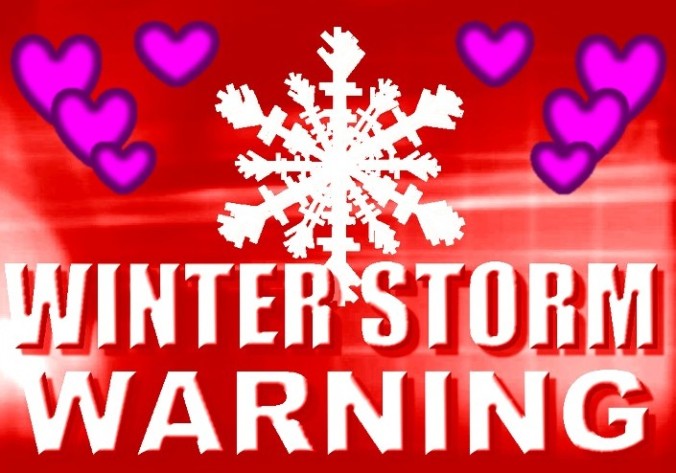 This image has been modified from the original at http://www.laceyoem.org/winter-storm-warning-has-been-posted-for-our-area/

Most years, Valentine’s Day insults my intelligence.  Women usually want a romantic gift or a vacuum cleaner and I’m no good at picking out either of those.  Fortunately, Mother Nature has eliminated such difficulty from my life this year.

I live in the South.  One inch of snow closes everything down for days, leaving death and distress on highways and anywhere else people dare to travel.  That includes the little side road I live on, which means I can’t drive to fetch roses, candy, or the usual holiday scams.  And delivery people won’t be able to get them to me, unless stuff is sent through the post office.

If the post office can’t handle delivering a book without smashing it up like a piece of glass, those flowers stand no chance unless they’re headed for my salad instead of the vase.

And the horrors keep piling up.  Guys like me love spending time in stores like Victoria’s Secret because we look less creepy when we’re surrounded by women’s undergarments.  If the roads are covered in ice, I guess we’ll just have to buy something leathery or lacy online.

I hope the post office has not yet figured out a way to destroy lingerie, but I’m not holding my breath.

Buying lingerie for a woman has never been less risky because one can’t actually see how big something is until it arrives.  If it’s too big, we can’t possibly think she’s that fat because we bought the same size as what’s in her underwear drawer.  If it’s too small, we can use the same excuse to squirm out of whatever accusations come flying our way.  And because of the snow and ice, we now have an airtight excuse when it inevitably arrives late.

Of course, that means the unfortunate lady will be forced to go without underwear on Valentine’s Day and, on top of that, the storm may have knocked out electricity by then.

No electricity?  No problem!  One romantic BBQ dinner on the gas grill coming right up, minus the obligatory chick flick viewing.

Mother Nature really is just one of the guys…

Except for videos and where credit to others is given, I own the rights to all content in this blog. You may make noncommercial use of excerpts and photographs if you give proper attribution and link back to the original post. The reproduction of full articles is prohibited.
Loading Comments...
Comment
×
%d bloggers like this: